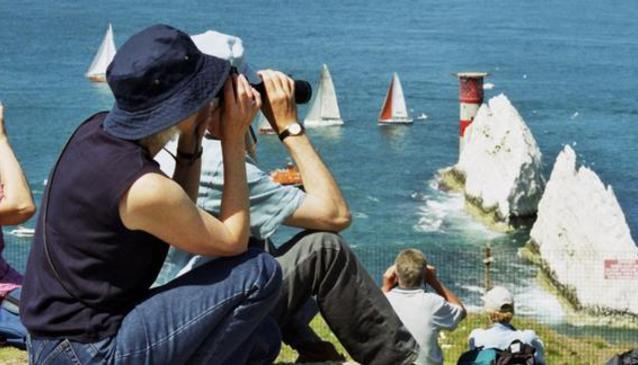 Directions to The Needles New Battery

There are two parts to this fascinating National Trust site, the Needles New Battery as detailed here, plus The Needles Old Battery. They are a five-minute steep walk up/down hill from each other, or you can catch the bus between the two.

The Needles New Battery is free to enter.

Completed in 1895, the new battery was built further up the hill than the Old Battery, as there was concern of subsidence due to the larger guns. Placed in care and maintenance in 1918, the Needles New Battery was re-activated again for the second world war.

However, 1956 - 1971 were perhaps the most exciting years for the new battery, as the site was used for testing Black Knight & Black Arrow rocket engines before they were shipped to Woomera for launching. The Needles New Battery reveals the little known story of Britain's Cold War 'Race for Space'. Rockets were tested under strict secrecy here on the Isle of Wight. You can find out more of the interesting history and check out the underground museum, along with getting the best view of The Needles for photos at the viewpoint.

By 1975, the National Trust took on the Needles Old and New Battery, along with the surrounding downland. The underground rooms were opened to the public in 2004.

Please see the official National Trust website on the link provided, for full information including opening hours, or to find other National Trust attractions on the Isle of Wight.