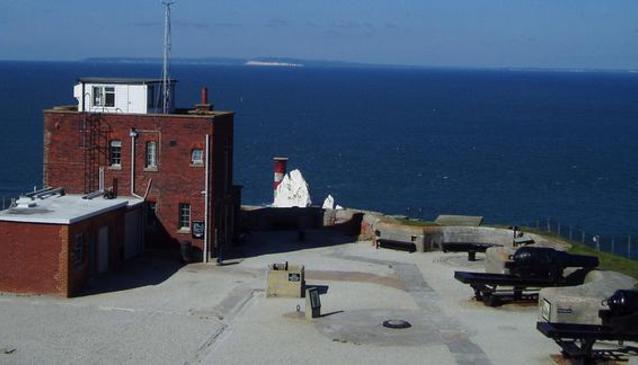 Directions to The Needles Old Battery

As the name suggests, The Needles Old Battery and New Battery are located on the tip of the headland, next to The Needles. The views from these National Trust treasures are stunning. Walk up to the top of the headland and you will see over Tennyson Down, along the beautiful southern coastline of the island and across the Isle of Wight. However, from anywhere on this impressive site you can enjoy the breath-taking views over the Solent to the mainland and up towards Yarmouth. A tunnel from the Needles Old Battery actually takes you underground and through to the original searchlight station, for unbeatable 'close-up' views over The Needles rock formation.

The Needles Old Battery has been maintained and re-created, with rooms as they would have been during the Victorian fort's use. The impressive entrance, across the rolling bridge and through the chalky hillside into the fort, entices you in. You are sure to be impressed by the original guns still mounted in position high over the water, informative and atmospheric rooms, not to mention the amazing view points of course! Something not to be missed is the searchlight emplacement, for the explorers among you! Climb down the steep spiral staircase, then walk through the narrow tunnel, to find a small underground room dug into the rock, with views over The Needles themselves! The huge searchlight situated here was used to survey the surrounding waters.

There are two parts to the site - don't forget to check out The Needles New Battery up the hill, which is free entry. They are a five-minute steep walk from each other, or you can catch the bus between the two.

See the official National Trust website for full information including opening times and admission prices, along with other National Trust Isle of Wight attractions.